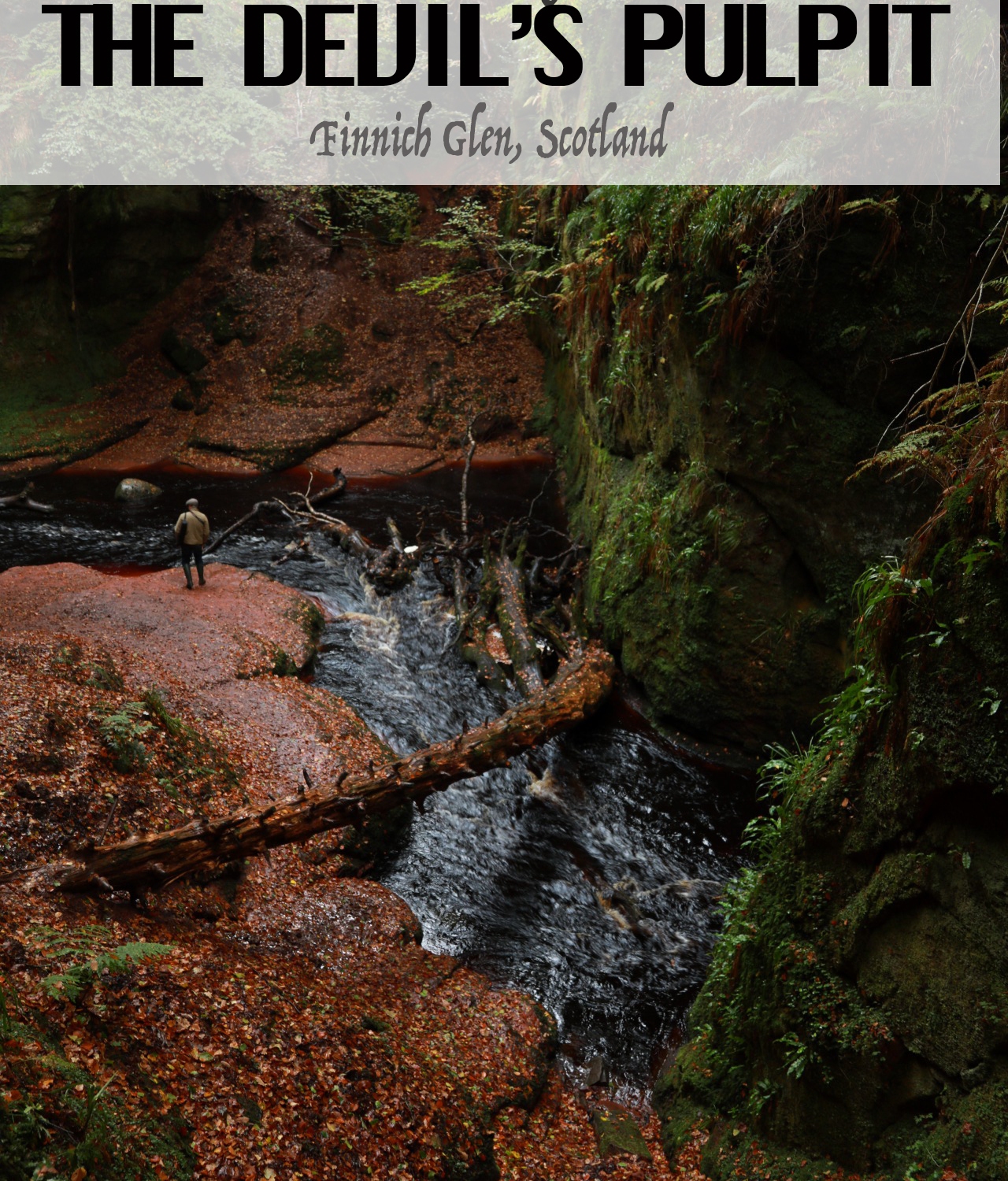 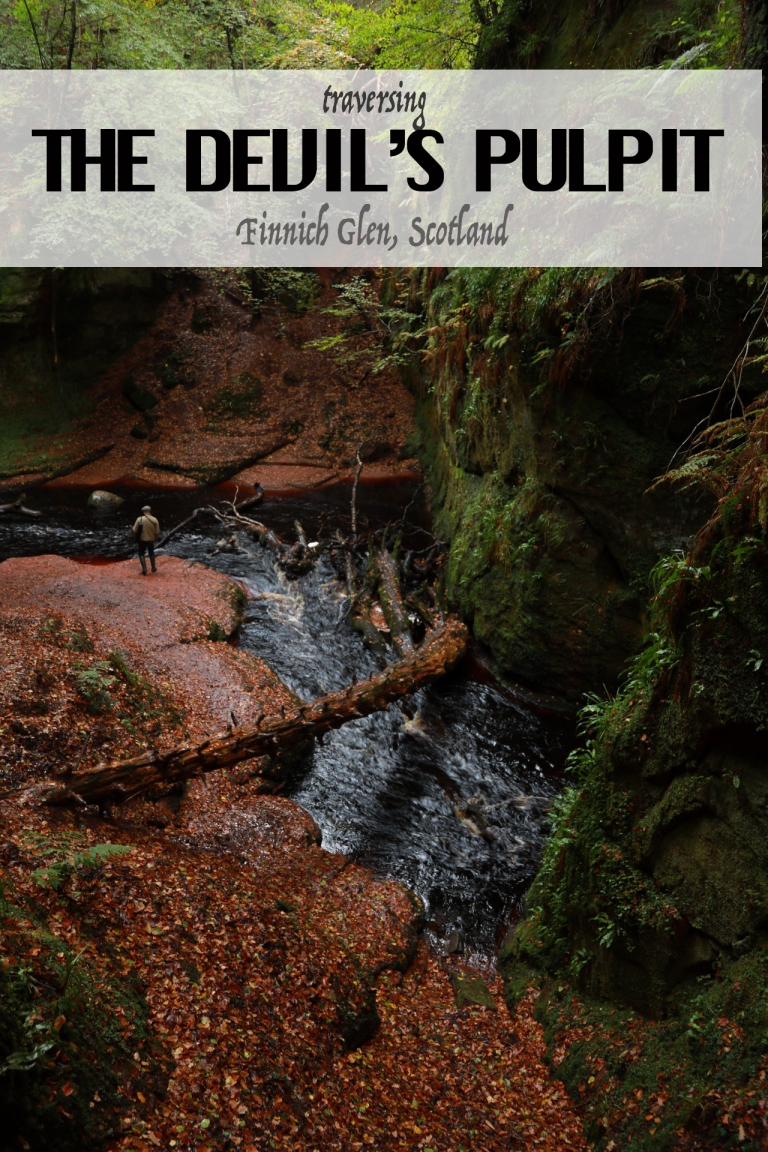 The trek down into Devil’s Pulpit is always worth it. What looks like a tree-lined creek in the middle of farmland a short drive outside of Glasgow turns out to be a dramatically deep-dropping gulch into the most fairytale of landscapes you’ll most likely ever find yourself.

It’s an adventure finding the trail, whether you hop the wall off the main road or find your way around it. You’ll eventually find a slippery stairwell down into the gulch, supposedly almost 200 years old (or older, depending on who you talk to). If you look closely at the rock formations, you’ll start seeing faces. And the water? It’s eerily close to the color of blood, due to the red sandstone that lies beneath it.

We first visited back in October 2016. I had seen photos on pinterest, very popular on those “25 Places out of a Fairytale in Scotland” posts, and it definitely wasn’t false advertisement. Some of you will recognize it from Outlander (worth watching for the amazing scenery and costuming, amongst other things).

We almost didn’t go. It was late in the evening, the sun was waning fast, and we had to get to our airbnb in Glasgow. I was worried it would take too long to find it.

Well, thank you to those bloggers out there that have documented the walk pretty well. Every time we’ve gone, we find a better and easier way in (which is making it a not-so-hidden gem anymore).

You can put Devil’s Pulpit into Google Maps and it’ll pop right up. On the map screenshot below, the area circled in red is the best place to park. Then, walk along the road until you see the tall stone wall at the bridge. You can either climb over (fairly difficult if you’re short like me, unless you have help), or you can walk a little further until the rock wall ends and there’s typically a gap in the fence to climb through (we found this later and it was much easier).

If it’s rained a lot: It’s going to be very muddy and lots of foot traffic makes it a messy walk. Still do it! Bring your wellies and go for it. You’ll see the staircase down to the pulpit on your left once you walk through the trees a bit.

This goes without saying, but BE CAREFUL and BE RESPECTFUL of the property you’re on. If you use your common sense and appropriate footwear, you’ll have a wonderful time.

Some people try to walk down the gorge through the water. Don’t be dumb. If it’s after a heavy rain and it looks pretty high or swift, don’t do it. You’re going to find yourself stuck in areas and then you’ll be one of those people they have to lift out. Don’t be that person. Better safe than sorry, especially your first trip there. Stick to the trails and know your limits.

*Public transportation? My friends in Glasgow have said there is a bus from Buchanan St. Bus Station. Research that for more info, I don’t have any further details. Google maps has a public transportation feature that typically works like a champ. 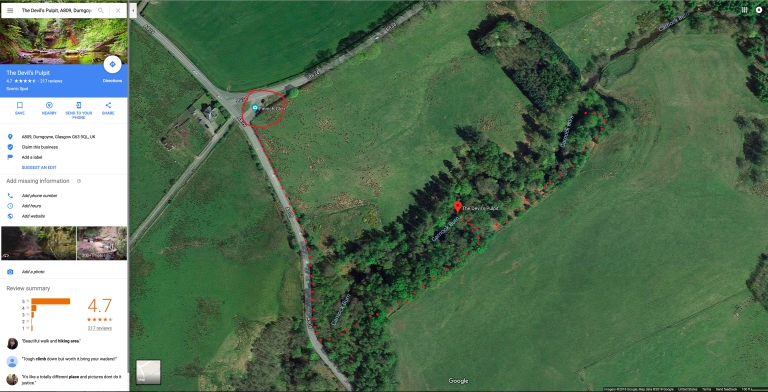 Once you find the stairway, watch your step as you go down (it’s Scotland, it rains, and therefore will probably be a little slippery). There are sometimes ropes overhead to help with your balance. Sometimes these fall and are in the mud. So, be prepared to get a little dirty. It’s all part of the fun! 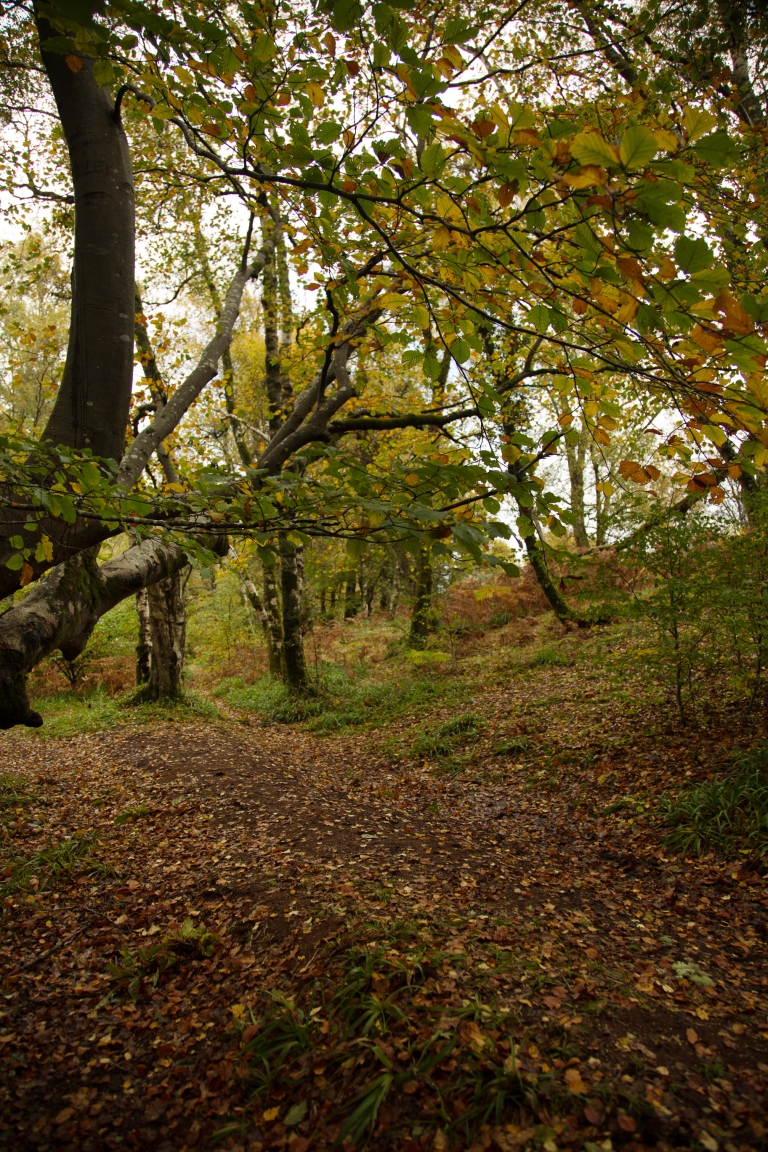 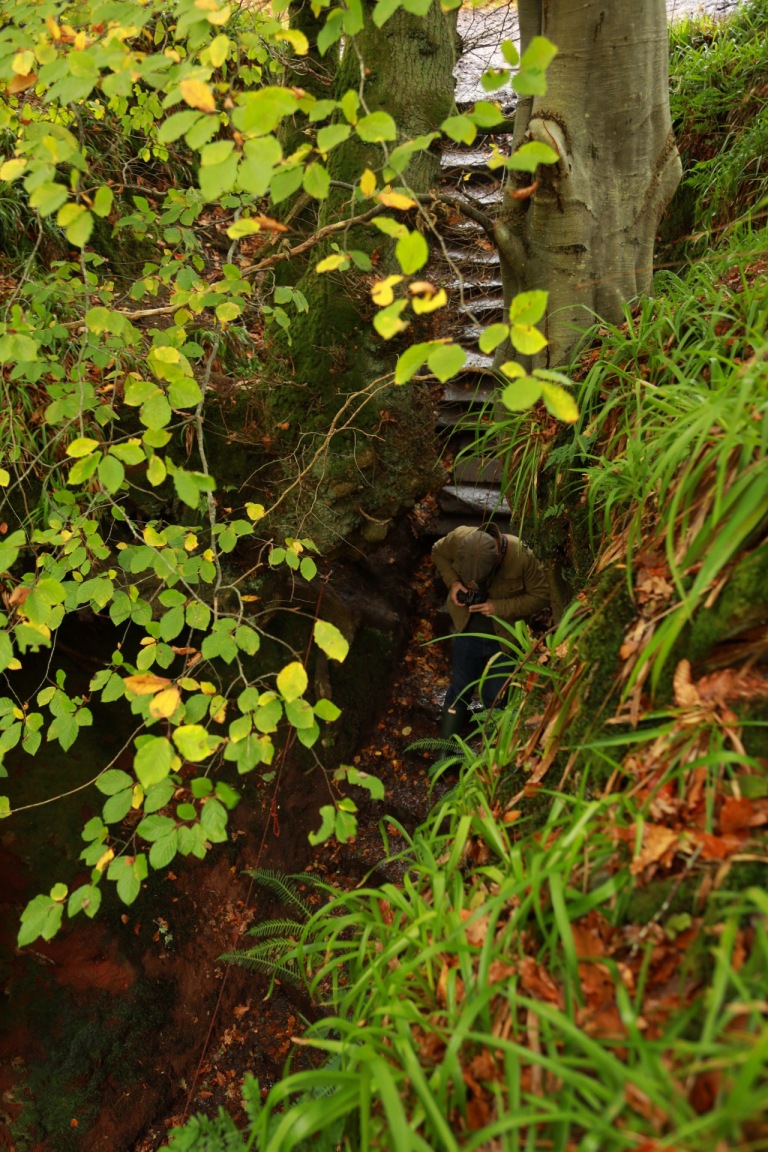 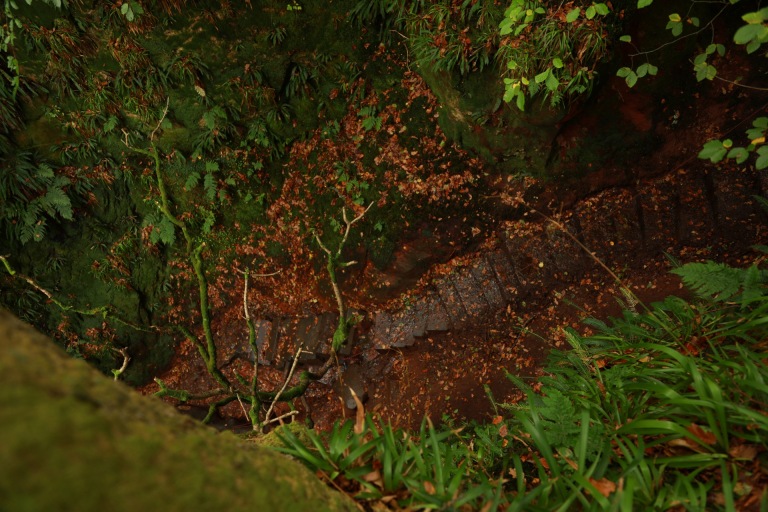 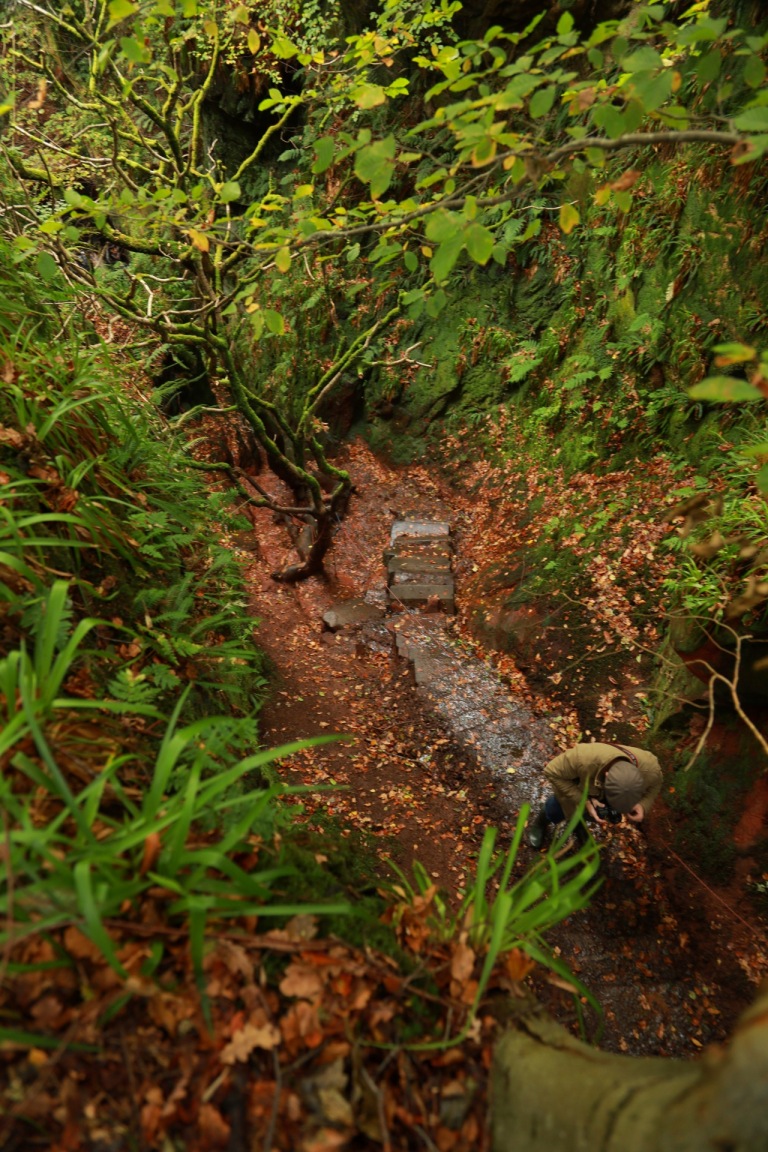 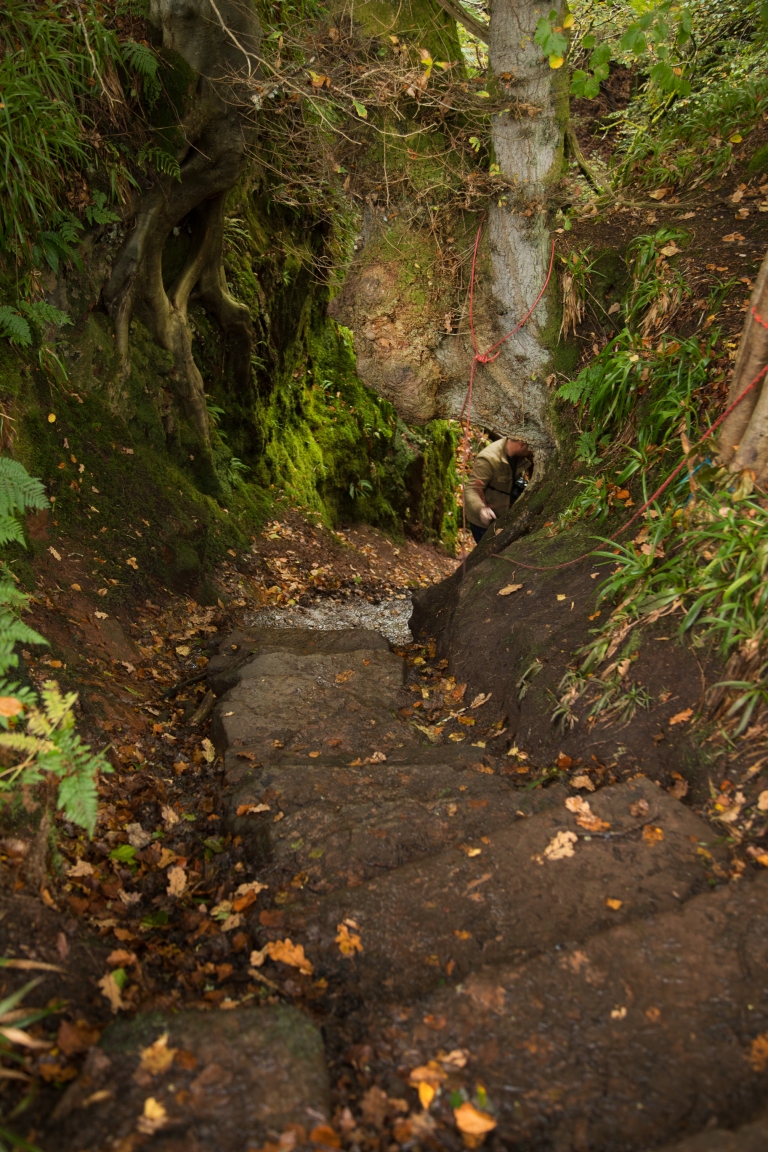 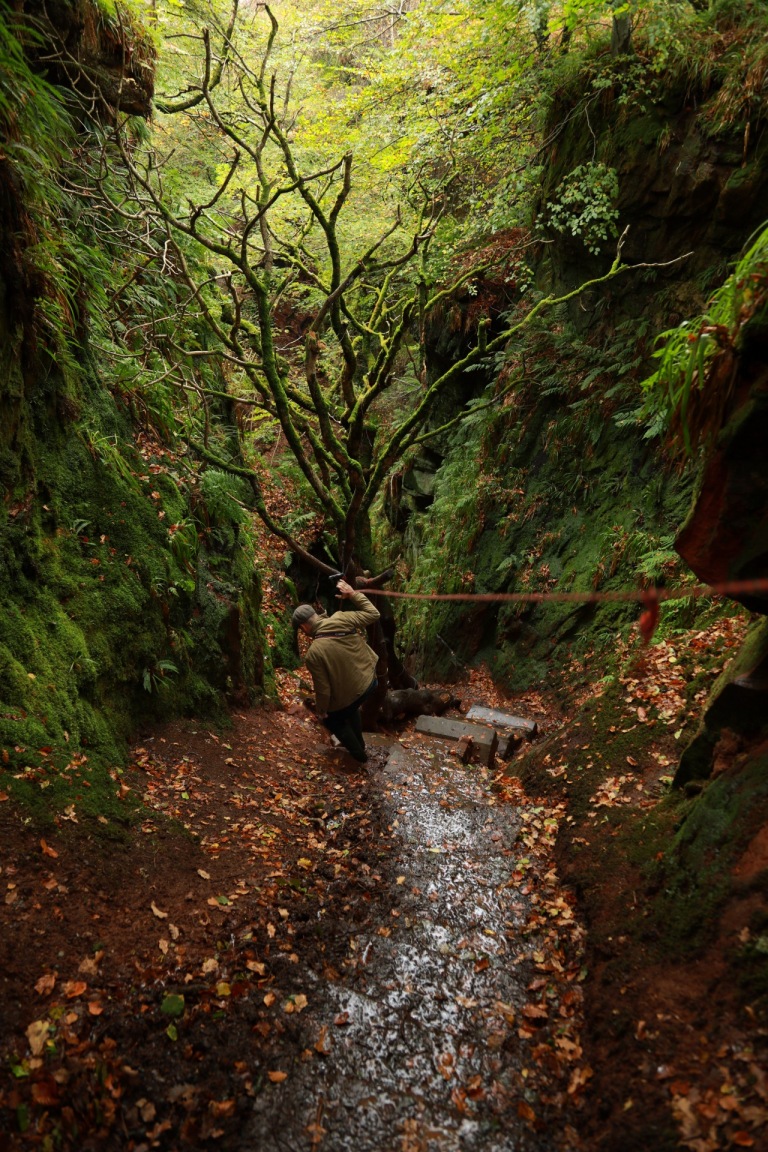 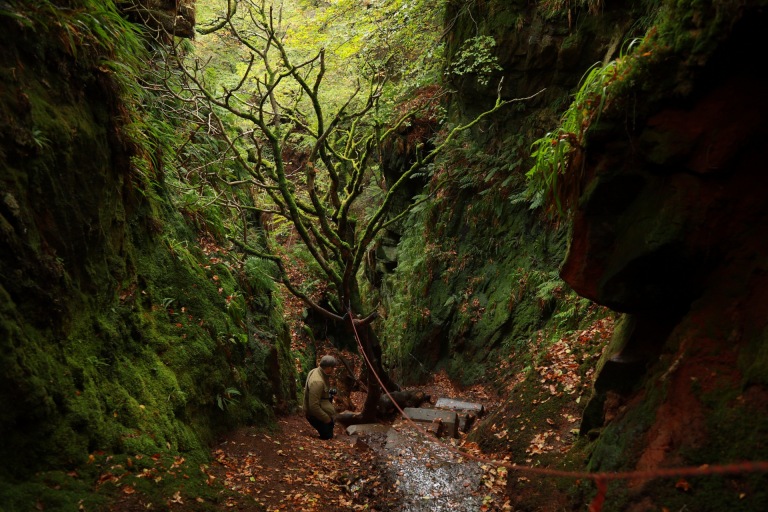 This is what awaits you: 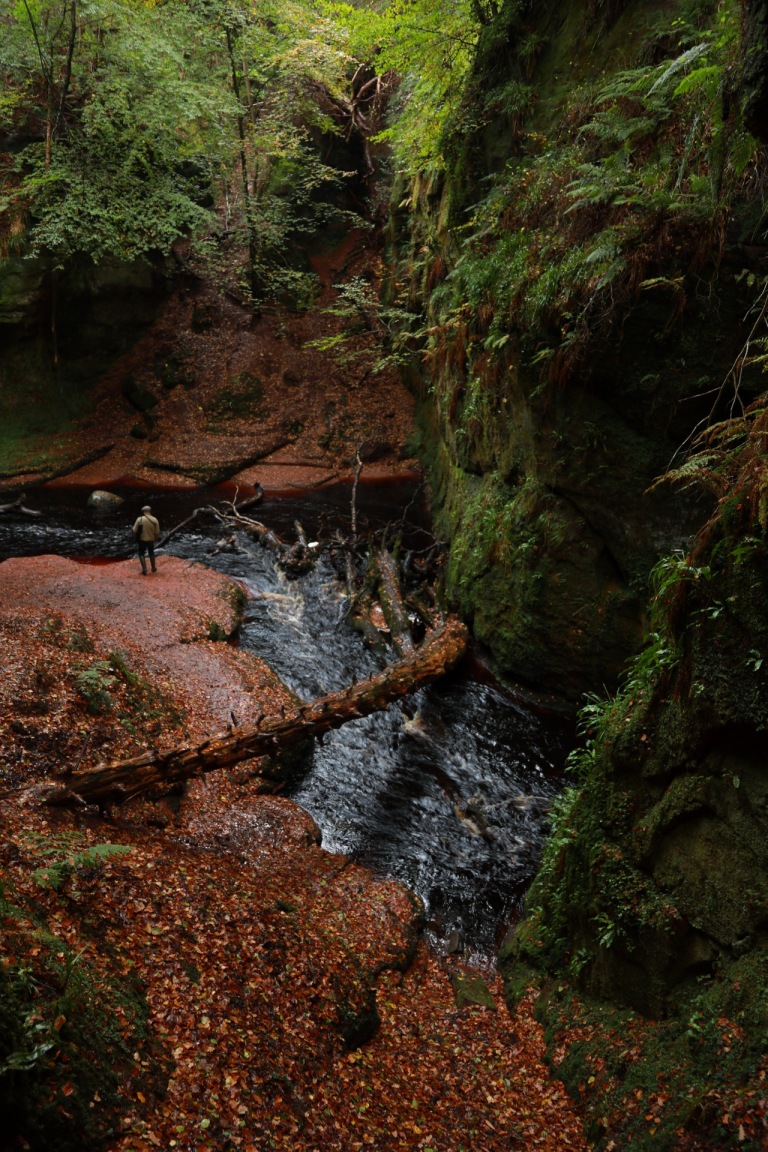 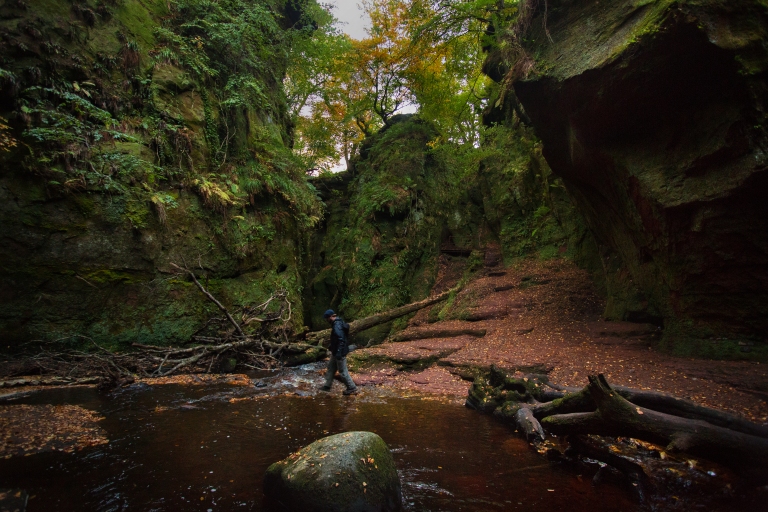 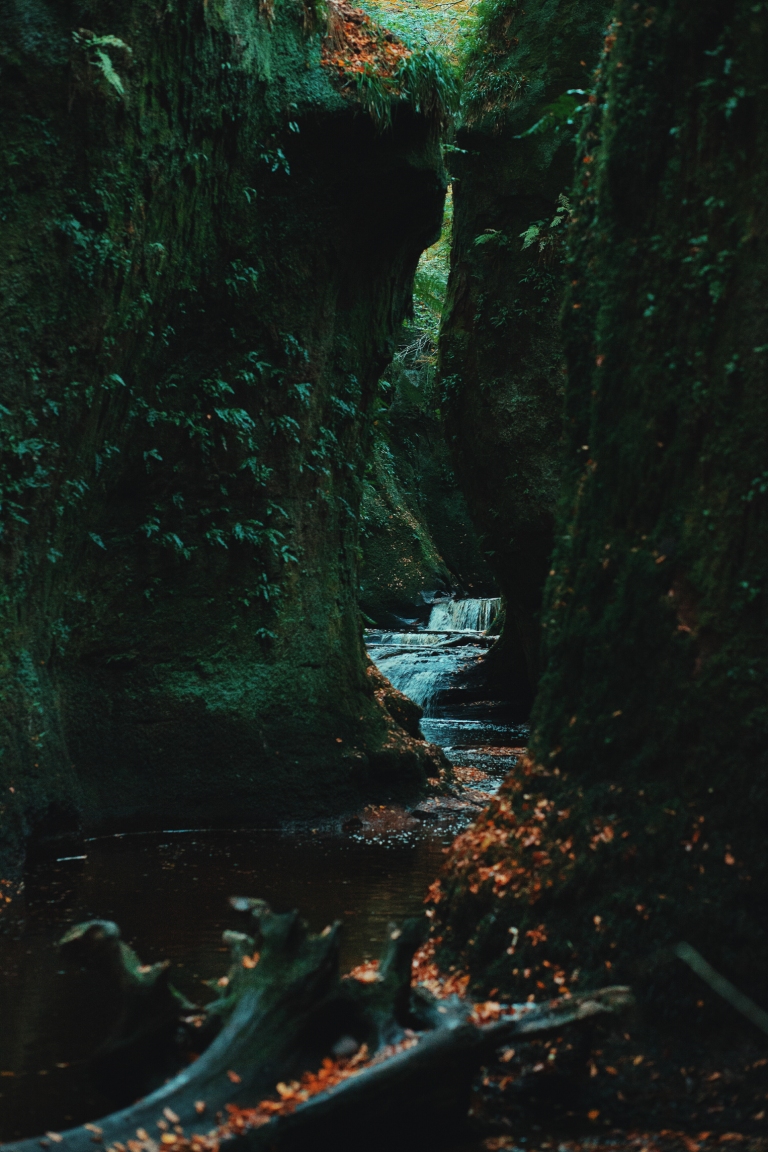 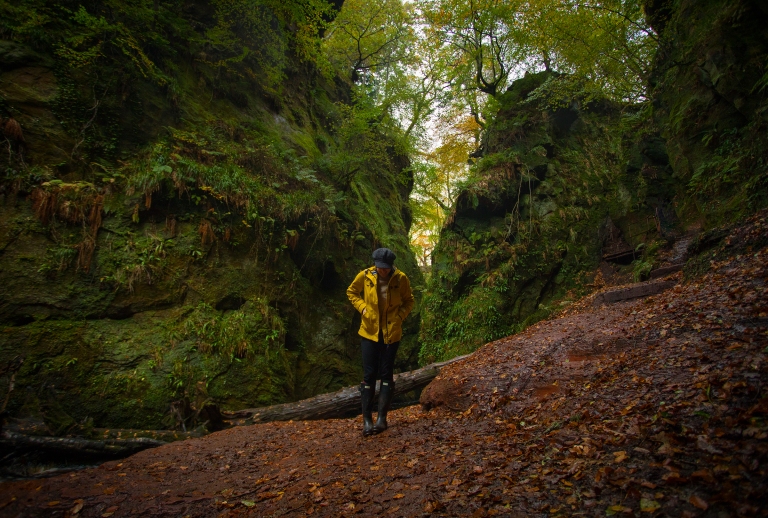 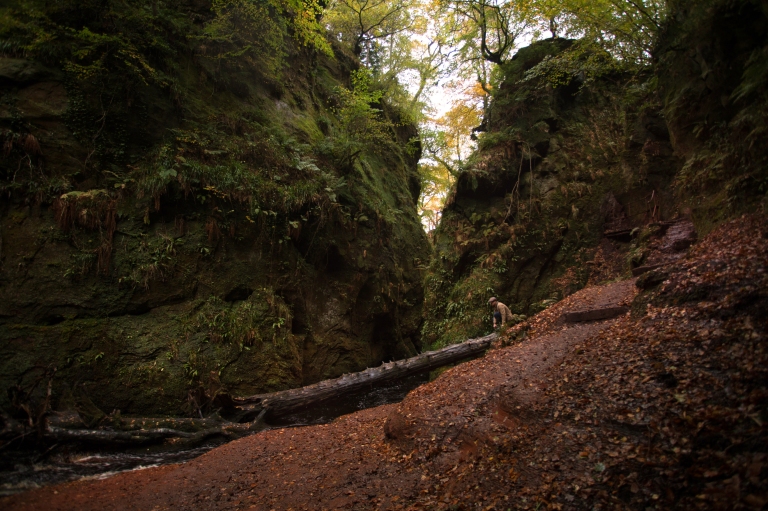 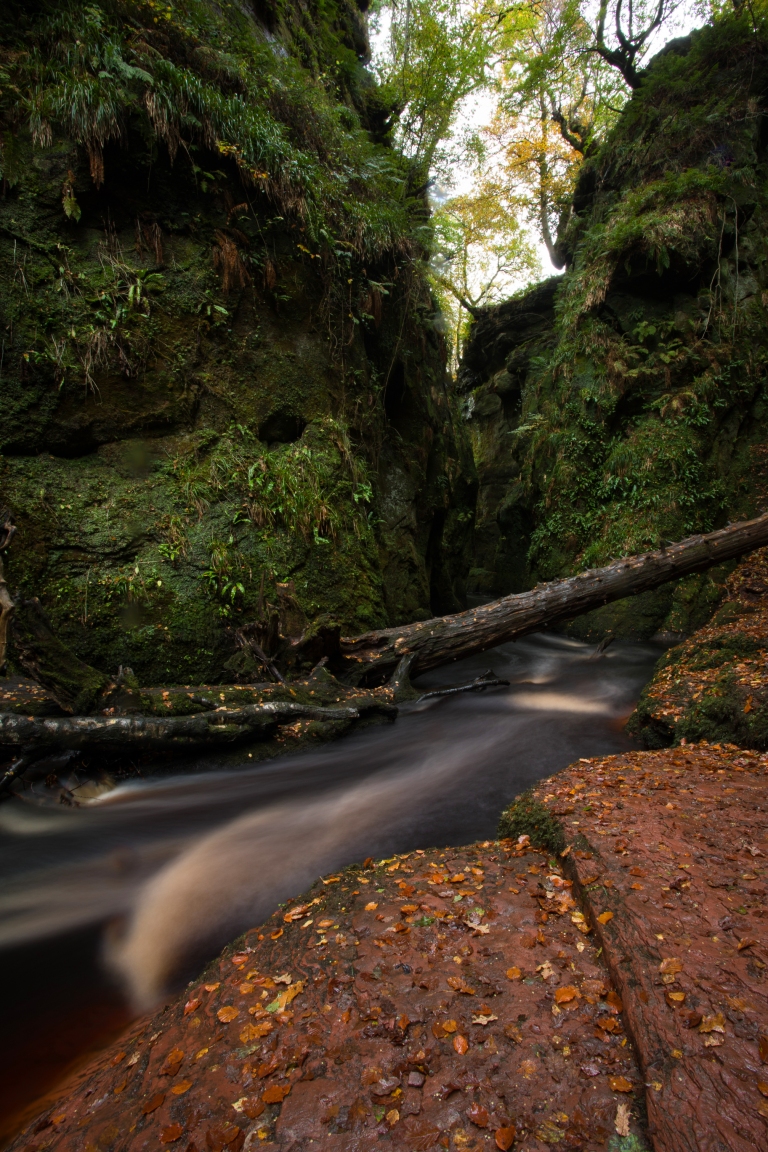 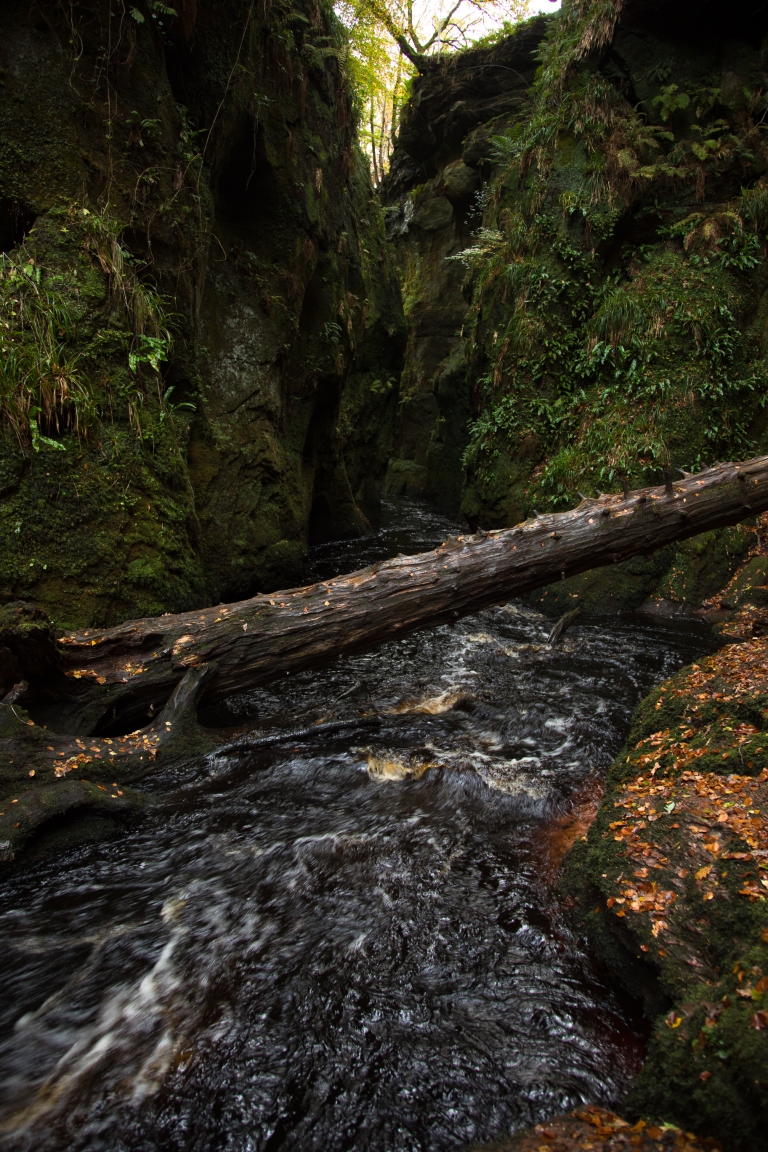 The first time we went, we actually went all the way to the end of the gorge to start with. It’s absolutely beautiful at the end too, and the ground levels out a bit so it’s easy to get down to the water. This area is much more visited now than it was in the past (Outlander fans and the internet have made it pretty popular).

To beat the crowds, try for morning. I’d say mid-week as well, but even the last time we were there during the week, we passed a dozen or so people. Which still isn’t bad, but if you’re looking for solitude, plan on hanging out for awhile as most people find the walk down the stairs too daunting and turn around pretty quickly, or at the very least, to wait-out the pockets of rain depending on the time of year you go.

As far as history, you’ll read all sorts of things, but straight from https://en.wikipedia.org/wiki/Finnich_Glen:

“Finnich Glen in Stirlingshire, is a short, steep glen up to 70 ft deep which runs east from Finnich Bridge on the A809. It was carved from the red sandstone by the Carnock Burn.

I'm an actress, filmmaker, photographer, and traveler based in Los Angeles, California. My real love is my home in the mountains north of LA, though, with my partner TJ and our two cat-kids Jack and Davey. I started this blog as a way to document my trips and a better way to share with friends and family instead of just posting random photos all over social media. Technically I'm a lady of Lochaber and Glencoe, after purchasing a tiny piece of land in Scotland. It won't be going on my driver's license anytime soon, but it's stuck online. Hope you enjoy and feel free to ask me questions about any of the places I've been. View all posts by ladyemilytravels

3 thoughts on “The Devil’s Pulpit”

This is a text widget. The Text Widget allows you to add text or HTML to your sidebar. You can use a text widget to display text, links, images, HTML, or a combination of these. Edit them in the Widget section of the Customizer.
Loading Comments...
%d bloggers like this: