Well, it took me long enough, but here I am again to continue where I left off.  If you missed part 1, check it out here:

So,  after we left the Végarður campsite, our real adventure began.

It was foggy that morning. And raining. We set out in our Happy Camper and pretty quickly reached the part of the ring road that isn’t paved.

Gravel roads are not a new thing for TJ and me. Neither is driving in bad weather.  But when you’re driving a rental in a foreign landscape, it can be pretty nerve-wracking. Single-lane bridges, blind corners, cliffs. It’s pretty unforgettable!

I took video mostly while we were driving through this dense fog and rain, but here’s a couple of snapshots (when visibility was bonkers and when the fog had lifted): Once we reached the point where the fog lifted and the road was paved again, we stopped here to stretch our legs:

From there, we drove over to Höfn to find a bathroom (and couldn’t find the public restroom, even following the signs, I’m sure it was there though), and continued southwest toward Vík.

A waterfall right off the road (easily climb up to it): 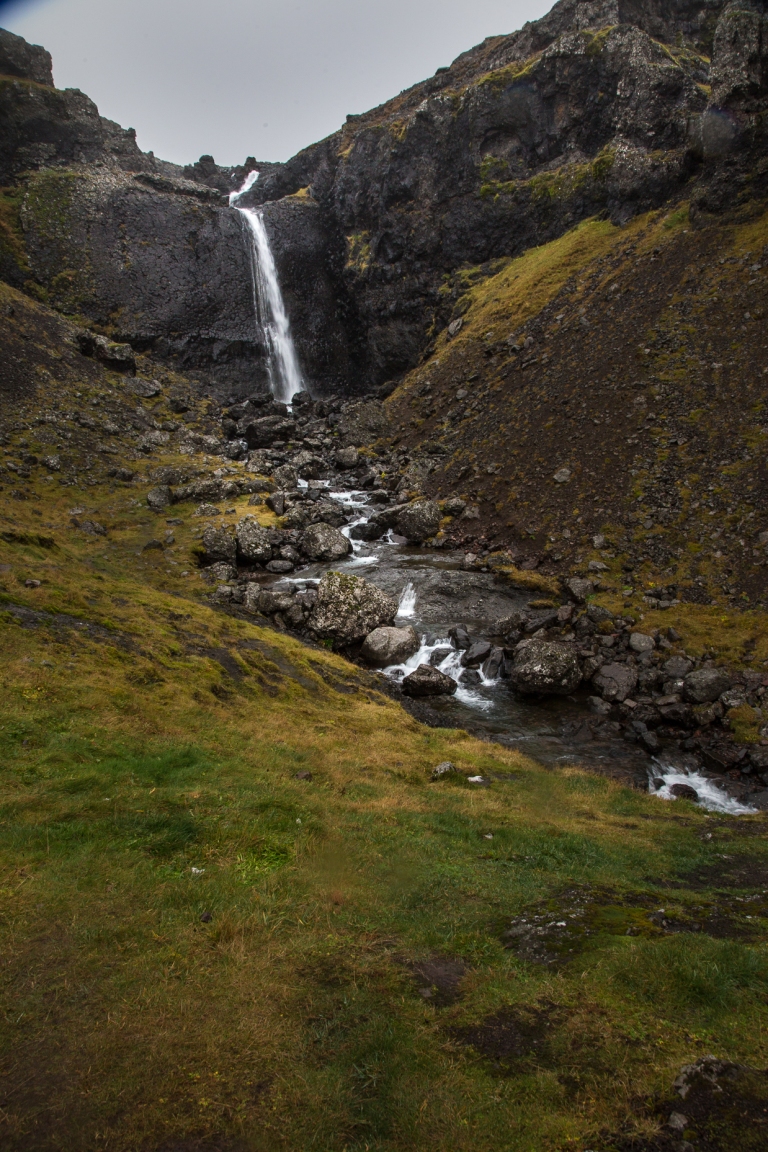 The south end of Iceland is so accessible to see glaciers, waterfalls, and black beaches right off the road. No major hiking involved.

First black beach stop (just west of Höfn). We had it mostly to ourselves for a few minutes, except for some animal friends: 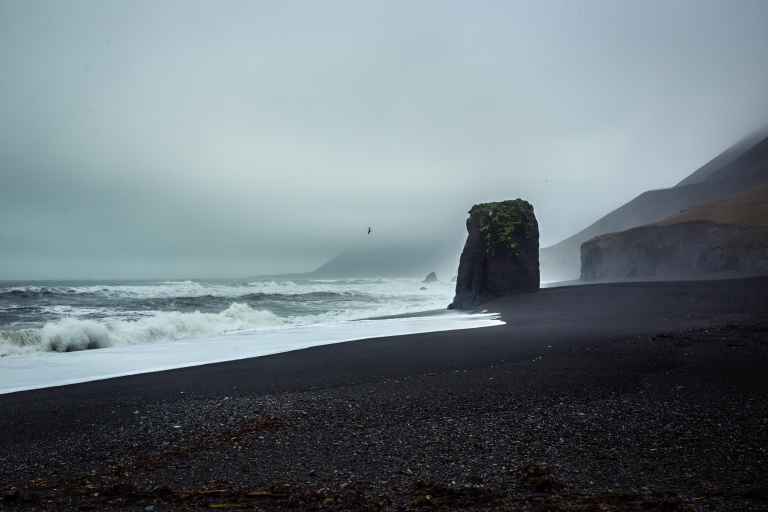 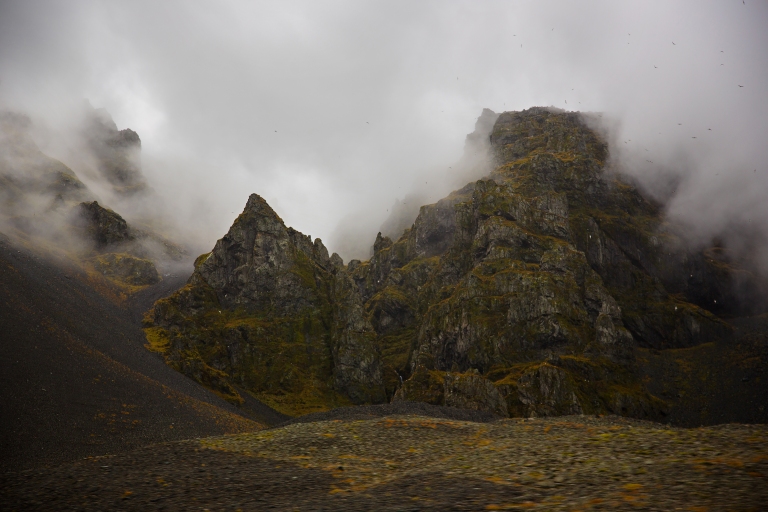 Iceland is a major tourist destination these days. So, it’s rare when you find yourself alone. It can be done, but not at popular stops during most times of the day, even in October.

Point in case: Jökulsárlón Lagoon
This spot is popular for a reason: it’s gorgeous! But you can luckily spread out enough once you arrive that it’s not too bad. Parking is easy and the viewpoint is beautiful. You can go on either side of the road (south side you can walk along the black beach scattered with ice and north side, the lagoon).

The colors are not photoshopped! It’s a surreal place. 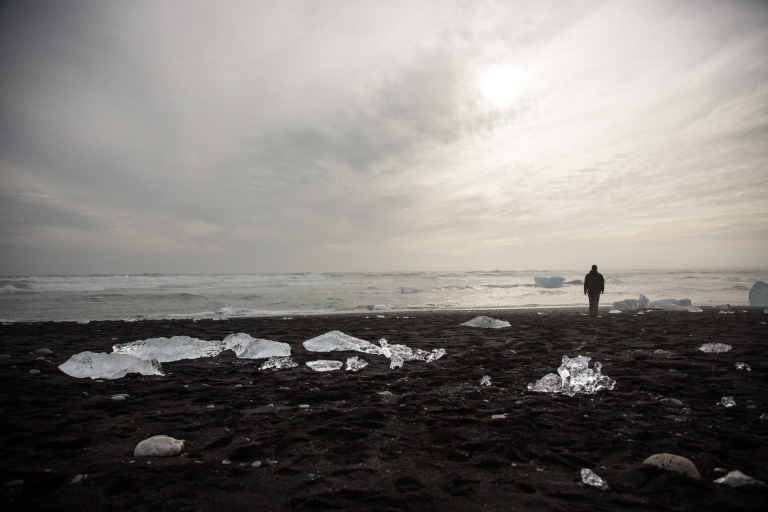 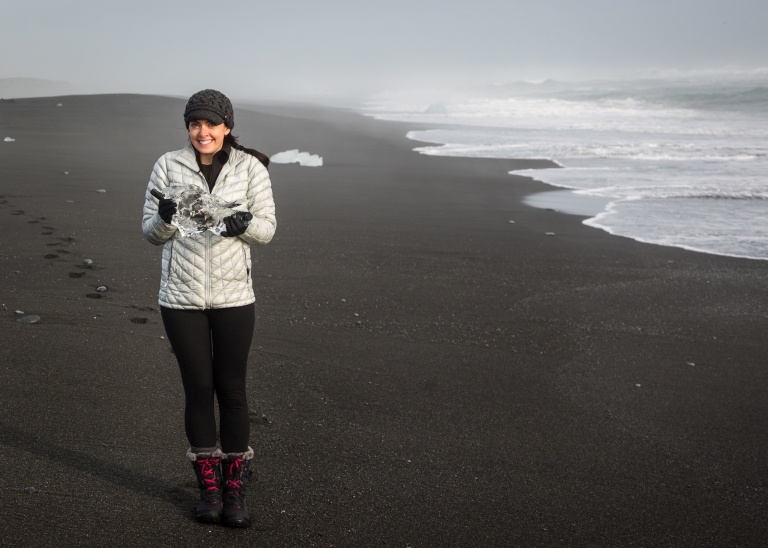 But, we did want something less crowded, so we continued west to another glacier that is easily accessible by a short walk up a hill. This one is called Fjallsárlón.

There were some dudes with drones, though, buzzing above our heads, but still some extraordinary views. Stayed here for a bit! And so, we searched for something else that may have even less people. And we found it: Kviarmyrarkambur, just up the road a little further west.

This was probably the highlight of the trip. Most people will stop at the top of the hill (where TJ stands triumpantly), but there is a small path you can continue on to get next to the lake.

So, our epic day continues. Back on the road, traversing one-lane bridges and finding more spots.

Other spots along our journey: 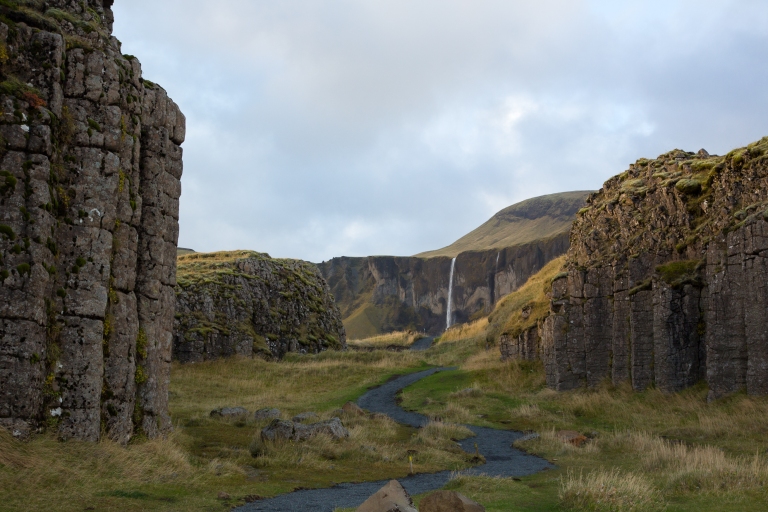 We reached Fjaðrárgljefur pretty late in the afternoon. This is a short drive down a gravel road and then a small hike up to the canyon view spots. There are walkways and roped off areas (what most of us photographers keep out of our photos, so don’t be surprised once you get there and it isn’t as “wild” as you thought it would be). They have these areas roped off now for safety (for people as well as vegetation). Too much foot traffic! Absolutely stunning, though! 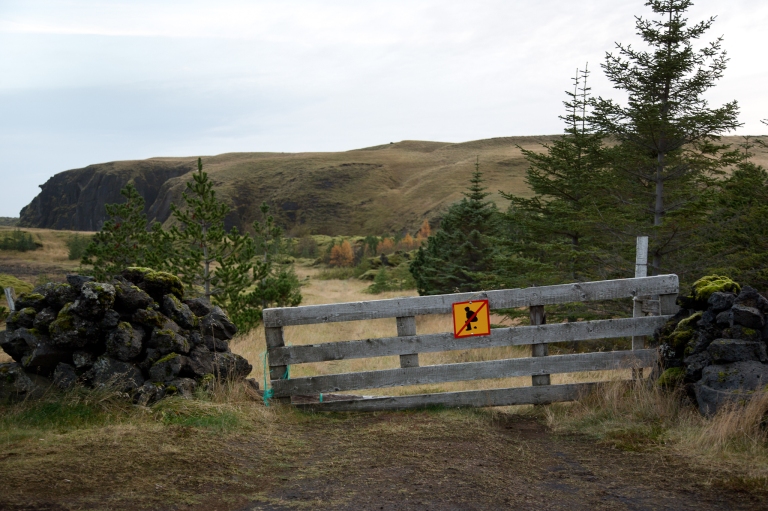 We decided to see if we could get a camping spot at the Skógafoss waterfall (1hr 20 from Fjaðrárgljúfur).And we did! The sun sets pretty early in October, so it was almost dark by the time we pulled up. But we got a spot right in front of the waterfall, along with a few other people nearby also camping in the parking lot. We did some long exposure photos in the evening. It was a quite spot, everyone camping was really respectful. 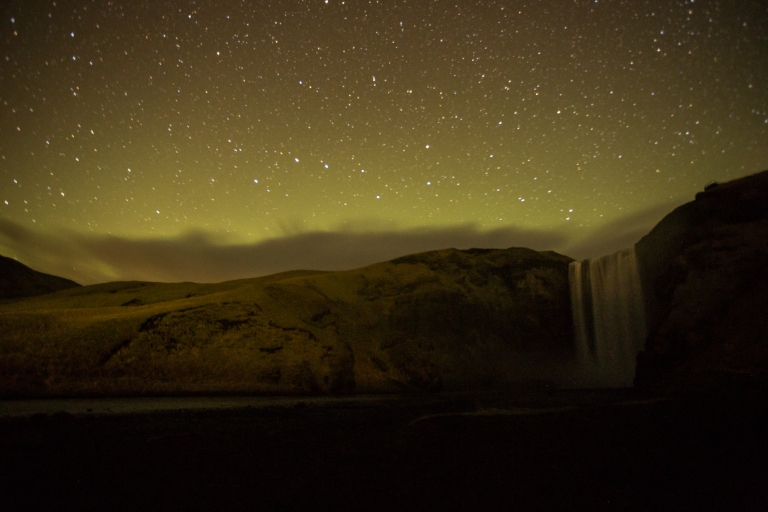 That night, the weather was some of the worst we had. Raining, wind: I was convinced the parking lot was going to flood, but we woke up in the morning and all was fine. Already people had started showing up to check out the waterfall. 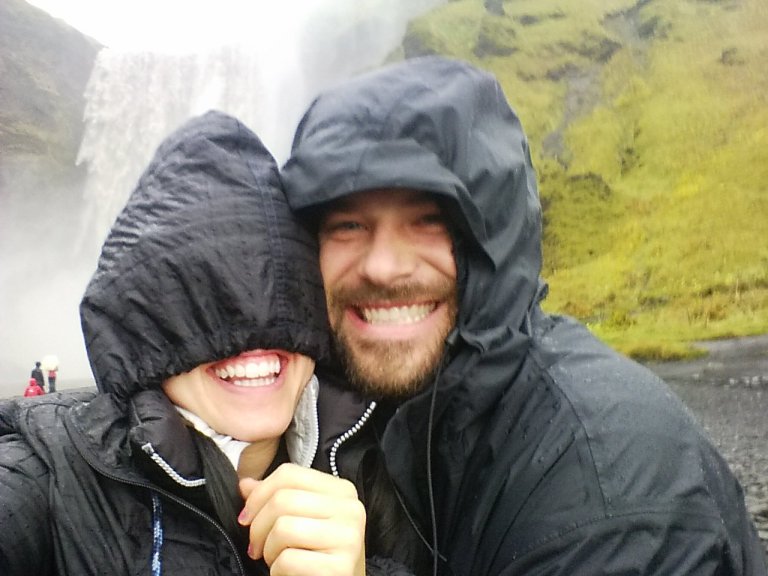 This was our last camping van day, we had to return it by end of day to Reykjanesbær, which was only about 2.5 hours away, so we had plenty of time to make a few stops along the way.

We went to a “secret hidden waterfall” as one traveler described it on Instagram — Hidden, maybe, but not secret (at least when we went). Bring your rain gear and good boots! We had to wait in line to walk into the small cavern to access the main “waterfall room” — definitely beautiful. We didn’t stay long because other people were waiting their turn, and there was a stream of selfie-takers, so we jetted out of there. This is in the Gljufrafoss/Gljúfrabúi area.

We dropped off our luggage at our airbnb in Reykjanesbær ( a little cabin in a sweet couple’s backyard, jacuzzi included!) and then dropped off our Happy Camper. It was a short walk back to the airbnb and we grabbed some burgers at a local mom and pop shop.

The next morning: taxi to the airport (our wonderful airbnb host made a reservation for us the night before) and off we went to London!

Iceland was a definite bonus to our trip. While there were a lot more people than we thought there would be, it’s worth the vacation. Just be realistic: it’s a small island and a lot of people want to see it, so if you’re not going off the beaten track (the F roads), you’ll have to deal with the general tourist vibe.

That being said, there are plenty of opportunities to find places you didn’t know about (aka that aren’t on instagram or blogs)

Also, the north part of Iceland was definitely quieter and less touristy.

But regardless of the tourists, it’s still surreal. No wonder so many films are shot here for other planets and medieval time periods!

Here’s our map again of what we traveled in 3 nights in a camper van plus one airbnb night: 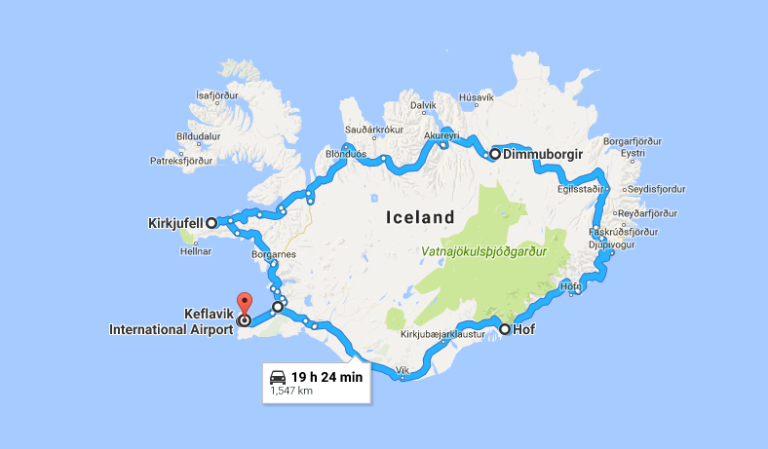 I'm an actress, filmmaker, photographer, and traveler based in Los Angeles, California. My real love is my home in the mountains north of LA, though, with my partner TJ and our two cat-kids Jack and Davey. I started this blog as a way to document my trips and a better way to share with friends and family instead of just posting random photos all over social media. Technically I'm a lady of Lochaber and Glencoe, after purchasing a tiny piece of land in Scotland. It won't be going on my driver's license anytime soon, but it's stuck online. Hope you enjoy and feel free to ask me questions about any of the places I've been! View all posts by ladyemilytravels

This is a text widget. The Text Widget allows you to add text or HTML to your sidebar. You can use a text widget to display text, links, images, HTML, or a combination of these. Edit them in the Widget section of the Customizer.
%d bloggers like this: